Benefits of Reading Books: How It Can Positively Affect Your Life 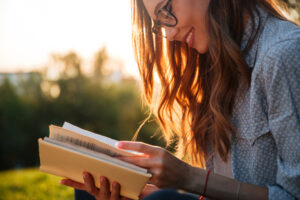 Reading books is a simple pleasure we’ve enjoyed since the 11th century when the first novel is believed to have been crafted. Beyond the enjoyment we receive from a good book, there are further benefits of the activity such as strengthening of the brain, increasing empathy, and building a greater vocabulary. Continue reading below to learn more!

In the 11th century, a Japanese woman known as Murasaki Shikibu wrote “The Tale of Genji,” a 54-chapter story of courtly seduction believed to be the world’s first novel. Nearly 2,000 years later, people the world over are still engrossed by novels — even in an era where stories appear on handheld screens and disappear 24 hours later. What exactly do human beings get from reading books? Is it just a matter of pleasure, or are there benefits beyond enjoyment? The scientific answer is a resounding “yes.”

Reading books benefits both your physical and mental health, and those benefits can last a lifetime. They begin in early childhood and continue through the senior years. Here’s a brief explanation of how reading books can change your brain — and your body — for the better.

Reading strengthens your brain
A growing body of research indicates that reading literally changes your mind. Using MRI scans, researchers have confirmed that reading involves a complex network of circuits and signals in the brain. As your reading ability matures, those networks also get stronger and more sophisticated.

In one study conducted in 2013, researchers used functional MRI scans to measure the effect of reading a novel on the brain. Study participants read the novel “Pompeii” over a period of 9 days. As tension built in the story, more and more areas of the brain lit up with activity.

Brain scans showed that throughout the reading period and for days afterward, brain connectivity increased, especially in the somatosensory cortex, the part of the brain that responds to physical sensations like movement and pain.

Increases your ability to empathize
And speaking of sensing pain, research has shown that people who read literary fiction — stories that explore the inner lives of characters — show a heightened ability to understand the feelings and beliefs of others. Researchers call this ability the “theory of mind,” a set of skills essential for building, navigating, and maintaining social relationships. While a single session of reading literary fiction isn’t likely to spark this feeling, research shows that long-term fiction readers do tend to have a better-developed theory of mind.

Builds your vocabulary
Reading researchers as far back as the 1960s have discussed what’s known as “the Matthew effect,” a term that refers to biblical verse Matthew 13:12: “Whoever has will be given more, and they will have an abundance. Whoever does not have, even what they have will be taken from them.” The Matthew effect sums up the idea that the rich get richer and the poor get poorer — a concept that applies as much to vocabulary as it does to money.

Researchers have found that students who read books regularly, beginning at a young age, gradually develop large vocabularies. And vocabulary size can influence many areas of your life, from scores on standardized tests to college admissions and job opportunities.

A 2019 poll conducted by Cengage showed that 69 percent of employers are looking to hire people with “soft” skills, like the ability to communicate effectively. Reading books is the best way to increase your exposure to new words, learned in context.