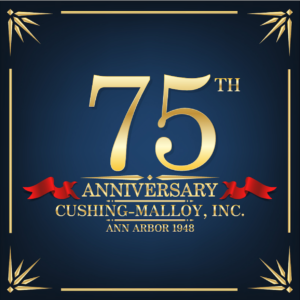 Cushing Malloy has been located in the same building since 1948 and is now proud to hold its 75th anniversary in the same location.

Connie Cushing remembers growing up in Cushing Malloy’s shop, playing hide and seek with her sister when her dad was working. Many of Cushing Malloy’s staff grew up together and are now looking forward to retirement and the next generation to take over the family-owned American book manufacturing business. This family-oriented business has watched its employees grow up, get married, and have kids over the 40 years that Connie has been there. Even though there have been major hurdles to jump over in recent years, Cushing Malloy has taken them in stride and is now thriving in wake of the pandemic. The need to get off computers and pick up and feel a book has increased sales by 35%. Cushing Malloy has also opened up for different genres in the religious market which has grown exponentially. Cushing Malloy has even been printing religious material to be passed out at truck stops. Connie says that is neat to walk into truck stops and see their product sitting on the shelves. The religious aspect of their business has stood the test of time. No matter the circumstances their core customer base has stuck with Cushing Malloy.