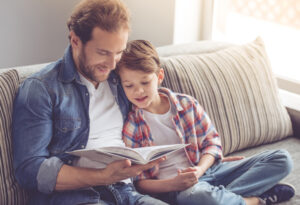 Reading from physical, printed books benefits children more than reading from a tablet, a study published in Pediatrics found. Continue reading below to learn more about the science behind why you should have your children reading from books.

More than 98% of families of children aged 0 to 8 years own a mobile or tablet device, according to one 2020 study also published in Pediatrics, and most 2- to 4-year-old children spend an average of 2 hours or more per day on digital media, according to findings published in 2020 by Common Sense Media.

These data partially inspired the new study’s concept, according to co-author Tiffany G. Munzer, MD, a pediatric developmental behavior researcher at the University of Michigan.

“Digital technology is almost ubiquitous in families’ lives, but there’s not enough that we know about the effects of digital media, on how children learn and develop and grow,” Munzer told Healio.

“We were really curious about how a tablet app might compare with one of the best or gold standard ways of interacting with the child, which is by reading a print book,” Munzer said. “And so, we wanted to compare some of the differences between using a book on a tablet app compared with a parent and child reading over a print book.”

Munzer and colleagues examined interactions between 72 parents with their young children, aged 2 to 3 years, in a lab designed to resemble a living room. Each parent was asked to read their child a print book, and then one story apiece on two tablet apps — often simple stories and nursery rhymes familiar to the readers. The tablet apps had special modes and buttons for interaction, as well as an auto-play feature.

“After the parents and kids did this experimental protocol, we went back and watched the videotapes, and [noted] all the different types of ways that parents talk to their children,” Munzer said. “We also counted how often the child responded to their parents.”

“We found that parents initiated less conversation with their children on a tablet app, the speech was kind of less developmentally rich, and children were less likely to respond to their parents when engaging over a tablet, which were things that we kind of anticipated,” Munzer said.

Although the answer is not to ban tablets from use in kids, Munzer said the researchers hope that software developers take note of what will assist children in using tablets and developing similar skills as they would in reading print books.

“For families, the tablet can be such a convenient device,” Munzer said. “But there’s certain aspects of the tablet that aren’t designed to promote this kind of interaction and aren’t designed with children’s development in mind. It’s not to say, ‘don’t use a tablet,’ it’s just that maybe we can take some of the lessons that we know from [reading a print book], and hopefully try to translate it to the tablet.”